Few industries can rival the antiquity of Cornish mining, and still fewer have excited such fascination among economic and social historians.

I do love a bold claim and a niche history book. Here we are with both! This is the start of a two part in-depth look at Cornwall.  Today we focus on history, and the next review will focus on geology.  By the end of this we will be experts!

Now, dear reader, you will remember from the quiz in Field Guide: Rocks and Minerals all about metamorphic rock: what it is and how it is made. Basically, the geology in Cornwall is such that there are big granite outcrops which are surrounded by rich metamorphic rock full of tin, copper, lead, silver, zinc, iron and china clay (whatever that is).

This book begins in the far depths of pre-history when man and woman first worked out that if you heat rubbish bits of rock you get copper out of them.  Pre-historic man and woman weren’t really interested in copper though, because you couldn’t use it to kill people, but then along came the Bronze Age and we learnt that if you mix copper with tin you get hardy bronze to make spears and wotnot with. Tin bearing lodes are not very common, and from about 2000 BC,  until the Romans opened tin mines in Spain in the first century A.D., most of the tin for all civilisations around the Mediterranean Sea came from Cornwall (and maybe a bit from Devon, but we don’t discuss that).  Did you know that? I didn’t. 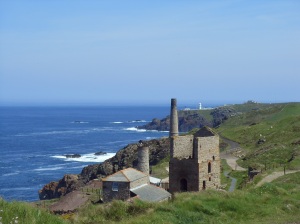 The Levant Mine, Cornwall

demarcations of roles: diggers, smelters, buyers and dealers, all of which came with their own rights and privileges.   The miners were left alone by successive governments until, in 1201, King John granted the first Stannaries Charter in an attempt to bring the tin industry more under royal control, to reduce the amount of tin smuggling and to introduce standardised weights and measures to increase the flow of money to the exchequer. This began a process of increasing regulation and control that developed in subsequent centuries. In spite of these attempts though, throughout the centuries Cornwall was known for lawlessness, rebellion and smuggling. This may be linked to the long history of poverty within the mining communities.

Nevertheless, tinners were initially legally protected and enjoyed many freedoms unavailable to other labourers.  They were exempt from a number of taxes and duties.  In these early days, they often shared in the profits, but also in the costs of mining, which built of culture of fierce independence and chronic poverty. This lasted until the reign of greedy Henry VII who passed control of mining to the landed gentry.  Miners became poorer – by the reign of Elizabeth they were described as the ‘roughest and most mutinous men in England’ and from then on Cornish miners were regularly involved in uprisings against the government.

The next few centuries see improvements in technology and education as miners had to exploit less obvious sources of tin.  By 17th century Cornish miners were reckoned to be the best miners in the world.  By the 18th century the mines were deeper than ever and they discovered a mysterious waste material from the deeper mines which turned out to be copper – which by this stage was even more valuable than tin!  Then they invented steam engines that could get us even deeper into the earth. This brought massive wealth to the mine owners and led to rapid growth in the size and number of mines. Rather brilliantly, a lot of our information about this period comes from Swedish industrial spies.  Now that is a job they don’t tell you about at school.

The remains of another Cornish mine.

Unfortunately for the Cornish miners, in 1768 a new outcrop of copper ore was found in Wales and prices sank dramatically. In addition many mines had gone as deep as current technology could take them without being unprofitable.  Eventually the Cornish adopted a new steam engine, invented by James Watts, which was more powerful than the old Newcomen steam engines but came with crippling conditions that made it borderline unprofitable.

That wasn’t enough though to save them.  There were various schemes of syndication to try to increase prices, amalgamation between different mines, and at one point the whole of Cornish copper was under the control of the Welsh mining magnate who had set up the rival mine that caused the problem in the first place!

What did save them was the Welsh mine running out of copper and the Navy’s need for copper-bottomed ships.  There was a revival with closed mines re-opening, new technologies flourishing again and Cornish copper travelling the world.  Railways were built, and by mid century it was a mature, confident industry.

Sadly, it wasn’t to last. Emigration of Cornish miners  to Scotland and Wales began in the 18th century  but it increased in the 19th with mines opening in Latin America, America, Canada Spain, Norway and the Caribbean, Australia, Tasmania, New Zealand, Malaya and South Africa. Apparently, there are more Cornish names in Wisconsin and South Australia than there are in Cornwall.  Ironically, these foreign mines, often built and made successful by expatriate Cornishmen, were the ultimate cause of the collapse of the Cornish mining industry.

The first world war was the final nail in the coffin. After that a few mines limped on, variously opening and closing, but the heyday was over and the rest of the tale a rather depressing slide into oblivion with the government stepping in to keep the mines going until, in the 1980s, even that support was withdrawn. Finally on March 6th, 1998, the last miner came to the surface in the Crofty mine, ending a tradition that went back for 4000 years.  I’ll be honest, dear reader, I was a bit damp around the eyes at this point.

In 2006 Cornwall was awarded World Heritage Status for its former tin and copper mining districts.

After reading this book, I can see why.

Allen Buckley does a great job of bringing this history to life. He judges well the limit of my interest in the details of mining and technical developments, and gives a real flavour of life in the mines. Every so often though, he gets carried away and we get sentences like:

Exploration and deepening took place alongside production stoping, so that tunnels were driven on lode, crosscuts were driven between lodes, shafts and winzes were sunk for access and ventilation and pitches were mined by tributers in a continuous and well organised operation. p71

To which the only possible response is “Indeed.”.

There are also a number of great words and names in this book.  A prize for anyone that can translate “ruffbudlers, spalliards and tutworkers could meet at the whimplat,  or perhaps in a gunnis for a crowst and to admire the mispickel.”  Perhaps while there they might converse with Hannibal Vyvyan, Francis Godolphin or Richard Bullock.

This was a good overview of a fascinating slice of history and, best of all, I now know what china clay is. Win.

The Story of Mining in Cornwall, Allen Buckley, Cornwall Editions, 2007

8 thoughts on “The Story of Mining in Cornwall, Allen Buckley”