Apologies dear Reader if you have been waiting for this post all day.  I had nothing planned for today other than finishing this book and writing a review for you, but then E awoke with a burning desire to go and see the dinosaurs at the Natural History Museum in London.  She was so intent that I thought it prudent to agree, on the condition that while we were there we also went to the rocks section so that I could take some rock photos with which to illustrate this post.  So, here we are a slightly delayed but highly beautified post for you. I’ve also added another geology quiz at the end!

Colin M Bristow should have been a publicist, not a geologist.  Take, for instance, this paragraph from the first page:

Four hundred million years of turbulent geological history have led to the Cornwall of today; it involves volcanoes and prehistoric animals, baking hot arid deserts and equatorial tropical forests, deep seas and one of the most important mountain chains that this planet has seen.  Cornwall’s importance in the geological world is confirmed by the fact that it has more hard rock geological Sites of Special Scientific Interest than any other British county.

Are you salivating too? It certainly got my geological heart racing.  Volcanoes! Deserts! A semicolon!  But is also raises so many questions. How can one mountain chain possibly be more important than any other?  Does hard rock geology come with a soundtrack? How can there be an equatorial forest when Cornwall is nowhere near the equator?  I guess we will have to read on and find out.

This book is a beautiful fit with the previous book as much of the geology of Cornwall has been explored as part of the excavation of the tin and copper mines. Why, we already know what China clay is – we are ahead of you, Colin!  But I hadn’t heard of the Cornubian Massif before. The book is really good at explaining in more detail why the conditions led to Cornwall being so rich in different minerals (largely due to heat and water, as far as I can work out).

The book has a great section on the development of our understanding of Cornish geology.  It begins in the 18th century with many geologists mainly interested in looking for evidence of Noah’s flood, to the setting up of the Royal Geological Society of Cornwall which provided a hub for all those interested in this  fascinating subject.  There is also a great story about an early 20th century geologist called EML Hendriks who

found the fossil plant Dadoxylon in rocks along the Roseland coastline thus showing that most of the rocks of west Cornwall… were around 100 million years younger (than previously thought).

She discovered that they were out by 100 million years!! 100 MILLION years.  What insane science is this that can be ‘give or take 100 million years’.  No wonder E is late all the time; after 4 years studying this it is a miracle she still wears a watch! 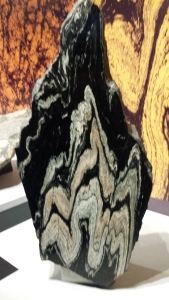 A beautiful example of folding

types of sedimentary rocks, which will be useful to those of you who haven’t yet read the Field Guide to Rocks and Minerals. We also learn that Cornwall isn’t great for fossil hunters, so you need to look elsewhere to scratch that particular itch. There is also a great description of how the earth’s crust is formed, which I can verify after my trip to the Natural History Museum.

I have to be honest, a lot of this book went into much more detail than I was interested in.  There were so many different seas, faults and mountains that I longed for a scale model of Cornwall that I could see it happening to.  It was hard to visualise a lot of it.  Still, it was a good overview and more dedicated students would get a lot out of it, relatively painlessly as it is really clearly written.

1) The name of the latest gang in Penzance

3) A huge chunk of rock in the middle of Dartmoor.

2) The Royal Geological Society of Cornwall is:

1) The oldest geological society in the world

2) Probably the second oldest geological society in the world

3) The only geological society to focus exclusively on hard rock

3) The most characteristic igneous rock in Cornwall is:

4) Why should you be careful of moving to Cornwall

1) Because of the fierce nature of the scrumpy

5) The official term for the study of fossils is

6) What are you likely to find on surfaces where the slaty cleavage and bedding are parallel?

3) Jokes that aren’t as funny the second time

8) What caused the ice age? 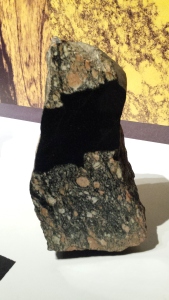 1) A dolerite intrusion in granite

Question 1: 2) The remains of a mountain range that once stretched from Alabama to Poland

Question 2: 2) Probably the second oldest geological society in the world

Question 4: 3) Because many local houses are built of granite and it is highly radioactive

Question 9: 1) A dolerite intrusion in granite