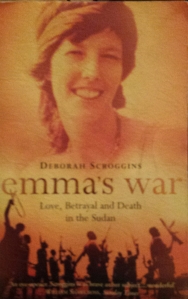 A few years ago, my parents (in a fit of madness) moved to South Sudan. They were going to spend two years working in the local government education department of a South Sudanese town called Rumbek. When they went, they left me with this book which they said provided a great overview of the history of South Sudan.  At the time, I knew very little about South Sudan, and none of it very reassuring. I took the decision that probably the less I knew about South Sudan, the better, otherwise I might not sleep for the full two years until they got back.  They were evacuated from South Sudan just over a year ago, when the country fell back into civil war.

So, as they were no longer there, I felt able to read this brilliant book and, I have to say, I am very glad I did not read it while Mum and Dad were there.  Emma’s War charts the history of conflict and humanitarian aid in Sudan starting in the late 19th century, but then really focussing on the 1980s and 1990s.  Officially, the book tells the story of Emma McCune, a British aid worker who married the charming and deadly Sudanese warlord, Riek Machar, and lived with him, often in the wildest parts of Sudan, until her death in 1993, but in reality it is much more wide-ranging.

The town of Rumbek, South Sudan

countries and how aid relief is politicised and rarely gets to the people it is intended for.  We are also able to follow some of the political infighting within the southern Sudanese SPLA (Sudan People’s Liberation Army) and between the various SPLA leaders and the northern Sudanese government. We learn about the endemic trade in slaves and the use of famine as a weapon of war.  Scroggins has a real talent in explaining the very complex world of Sudanese loyalties and the impact that they have on the lives of people in Sudan.  I loved this paragraph from early in the book which, for me, really captures why conflict in Sudan feels so inevitable and impossible to stop.

This book is not just a story of political and military conflict, is also a fascinating story of how a young idealistic woman, who was drawn to the Sudan by an almost missionary zeal help, and a fierce love of adventure, ended up marrying a warlord who, in many respects, was undermining everything she had been working towards.  Scroggins has done a huge amount of research for her book and she portrays a very nuanced view of Emma and her thoughts and actions.  She also shares a lot of the controversy that surrounded Emma with public and private opinion, both in the UK and Sudan being wildly split.  I think she also captures the sense that it is very hard to understand the truth of what happens during war, and that it is impossible for anyone to come out of it with their morality in tact. 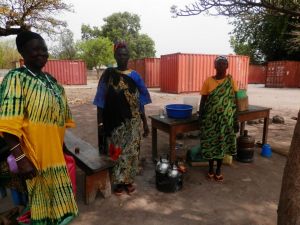 Tea ladies at the Rumbek Ministry of Education

For me though, some of the most powerful elements were actually Scroggins sharing her own experiences of being a reporter in Sudan.  Her descriptions of the famine in Safaha were harrowing, and all the more heartbreaking for the senseless greed that was fuelling a lot of them.  Her story also gives a sense of the challenges she faced as a journalist in understanding and negotiating her way through this complex country.

I would really highly recommend that you read Emma’s War, but despite being brilliantly written, it is not a cheering read. By the end of the book you really understand the bitter hopelessness in the Sudanese saying “When God made Sudan, He laughed”.