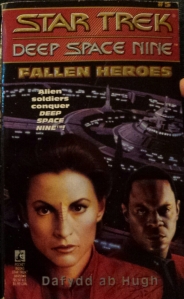 I was foolish, dear reader. I should know better by now, but I walked right into this one.  I was putting the Star Trek books in order so that I could try and make some sense of them, when I noticed that book 5 of the DS9 series was missing.  Clearly what I should have done is quietly rejoiced inside and carried on with my sorting, whereas what I actually did was say to E “I can’t seem to find book 5, did you not get it or is it somewhere else on the bookshelf?”.  It turns out that book 5 is E’s absolute favourite Star Trek book and she was distraught (well, distraughtish) that it had apparently been mislaid, and grew so concerned that I wouldn’t have the joyous opportunity of reading it that she immediately ordered another copy for me.  So, whereas before I had 35 of these novels to enjoy, I now have 36.  Lucky, lucky me.

Having read the book I’m not sure whether I should be pleased that E’s favourite Star Trek book was a gripping read or concerned that her favourite is one in which all but 4 of the characters die a terrible, bloody death.  For the sake of being able to sleep well at night, I’m going to choose the former option.

The premise of this story is that the casino owner, Quark, manages to set off a device that sends a message to a race of unstoppable killers while simultaneously catapulting him and Odo, the security chief who was with him, 3 days into the future.  The ship they are on in the future is full of dead bodies and so the story is split into their story of trying to work out what has happened, and the story of Sisko and the rest of the crew as they try, unsuccessfully, to defeat the unstoppable killers.  Will Odo and Quark manage to work out how to go back in time to stop this before it began, or are all the inhabitants of DS9 doomed to die?

I’m not one for spoilers, but there is a book six, so you’ve got to hope they survive or the rest of the series will be a bit dull. It was a fun, if slightly implausible read though.  It’s definitely in my top 3 Star Trek books!