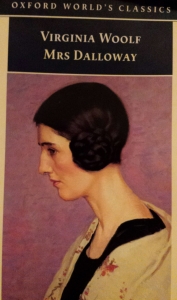 Dear Mrs Dalloway, could you be more dull??  You’re such a slender tome and yet so tedious.  How can you be on lists of ‘top 100 best novels’ when you are so full of nothing happening so very, very slowly?  I have been trying to read you for months.  I keep picking you up, getting bored, putting you down, trying again and yet you never get any more interesting.  Ever.

It is never a good sign when a book has both a very long preface and a very long introduction. Especially when the book itself is only a slender volume. No book should need that much explaining.  I confess that I haven’t read the introduction or the preface, as I wanted to read the book without being influenced by anyone else’s ideas.  Having finished the book I now can’t bear to read any more about it.  I understand that many people absolutely love this book.  There is a view that Virginia Woolf changed our literary landscape and has influenced countless authors since, all of which may be true, but this book is dull. D. U. L. L.

One thing which is impressive is that if your eyes glaze over for a few paragraphs you can still pick up the plot seamlessly. Even if the story is now being told from someone else’s perspective it doesn’t matter.  The hazy afternoonness of the book sort overwhelms everything else with its soporific mood and everything begins to blur together.

Anyway, if you do fancy it, the story basically takes place over the course of a day.  Set just after the first world war it follows Mrs Dalloway as she gets ready for a party she is giving for her politician husband. Through her we see her struggles with her daughter (nothing really happens though), learn about her past loves, both of whom turn up for the party (but don’t get excited, nothing happens).  We learn a lot about post-war society occasions and different forms that marriages can take.  Simultaneously we have the story of Septimus Warren and his wife Rezia.  Septimus is having a breakdown caused by his experiences in the war and Rezia is trying to get him the medical help he needs. The Warrens and the characters from Mrs Dalloway’s life sort of overlap a bit.  And then the day ends.

Even the one ‘horrifying’ bit in the middle was overlaid by the stupor I had sunk into.

Definitely not one I want to read again, but probably one you should make your own mind up about as lots of people do love it. Even E professes to have enjoyed reading it even though it isn’t set in space! Maybe I just need to read it at another time in life.  But then again, maybe not.