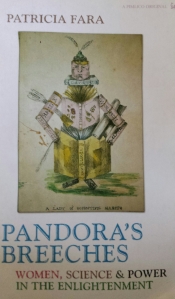 Pandora’s Breeches is a brilliant study of women in science during the Enlightenment.  Fara effortlessly dismantles the ‘great man’ approach to scientific history by introducing the women, and for that matter all the other people, who were involved in the scientific breakthroughs of the Enlightenment. From the glittering intellectual Emelie du Chatelet to the painfully self-abnegating Caroline Hershel, Fara gets under the skin of these women and explains their context, view of the world and the crucial role they played in developing our scientific understanding of the world. Indeed, it is Fara’s refusal to put these women in neat intellectual boxes and instead to explore the ambiguity of their lives that makes this such an interesting read. The book is structured as a series of pairings – ten ‘great men’ and the ten ‘great women’ who worked with, or influenced, them.

There is far too much interesting content in this book for me to do it justice in a blog post, so below are just my highlights.

The Language of Women in Science

It begins with a really interesting overview of the prevailing view of women in science at the start of the Enlightenment.  It will not surprise you to learn that the intellectual world was very much viewed as a male domain. It was thought to be a physical impossibility for women to think deeply about, well, really anything. But there were people beginning to think otherwise, and trying to account for the very few women who did openly interest themselves in science and philosophy. However, often these women were viewed as freakish and Fara quotes Mary Wollstonecraft’s bitter observation that she had:

been led to imagine that the few extraordinary women who have rushed in eccentrical directions out of the orbit prescribed to their sex, were male spirits, confined by mistake in female frames.

A get out clause if ever I heard one.

Fara goes on to discuss the language used within science and to note the paradox that Minerva and Lady Philosophy were often invoked and used in art to indicate wisdom, and yet real women were deemed devoid of wisdom and incapable of rational thought.  This lack of rationality had long been ascribed both to women and to nature itself. Both were thought to be disordered, illogical and in need to men to tame them. Francis Bacon developed this one step further with his sexually charged rhetoric of scientific men overcoming feminine nature. For instance, here he talks about how to extract truth from nature:

You have but to follow and, as it were, hound nature in her wanderings… neither ought a man to make scruple of entering and penetrating into those holes and corners when the inquisition of the truth is his sole object.

On other occasions, he talks about binding nature and making it your slave. Indeed, penetrating, undressing and dominating nature were themes which ran through the early advertisements for the Royal Society and which, Fara argues, are still endemic in science today.

It is interesting that at this point in time science, or natural philosophy as it was known, was not exclusively studied at university. Scientific debate took place in a  diverse range of locations.  Some, such as the Royal Society, deliberately excluded women, but others like the salons of Paris, or around the dinner tables of London involved women just as much as men.  Indeed, Margaret Cavendish became renowned for the debates that took place over her dinner table and went so far as to advise women who were interested in science to marry a similar man so that they would have access to this world.

But scientific and philosophical debate also took place in letters.  There is a great exchange of letters between Elisabeth of Bohemia (what a great name!) and Rene Descartes in which she:

relentlessly hammered away, pointing out contradictions and forcing Descartes to explain his ideas, to redefine his terminology and make it more precise. For example, under her urging, he acknowledged and spelt out the distinction between an infinite God and an infinite universe.

This was not a woman merely interested in passively learning, she actively engaged with his idea and many of the women in the book were at the centre of correspondence networks which fiercely debated the issues of the day.

Descartes’ ideas were, for a time, immensely popular in France until, largely because of the efforts of Emelie du Chatelet, the ideas of Newton gained more currency.  Du Chatelet was rigourously academic and became internationally renowned for her scientific knowledge. Yet, despite this, she is often referred to as nothing more than a lover of Voltaire or a translator of Newton.  Indeed, she herself was clearly aware of and annoyed by these views

Judge me on my own merits, do not look upon me as a mere appendage to this great general or that renowned scholar.

Du Chatelet sounds like a fascinating woman,  As well as her interest in science, she was also loved entertaining, dancing and fashion. She was also, by all accounts, a demon at playing cards and both won and lost a substantial amount of money that way. This ability to straddle both the ‘masculine’ and ‘feminine’ worlds led to a great deal of mockery and jealousy from both men and women and often left her very socially isolated.

What is interesting is that she was 27 before she began to get into mathematics – a fact which leaves me hopeful!  She soon moved out to live in the country with Voltaire where she converted the country estate so that they each had their own rooms to use for experiments and she began conducting her own research.  She published simplified versions of Newton’s ideas which were fundamental to his thoughts gaining acceptance in France, but she also wrote her brilliant Foundations of Physics which was published to great acclaim.

Emelie du Chatelet was “trapped between conflicting, unsatisfactory stereotypes – the learned eccentric, the flamboyant lover, the devoted mother” and her story is brilliantly told in this book.

Science took place in the home as much as at the university, so many women were drawn in initially because a lot of things, like astronomy, needed more than one pair of hands.  This was often a reason that women were educated in science, so that they could more effectively help their husbands or family.   So you have Caroline and William Herschel, a weird brother and sister duo who mapped the night skies. Over time, Caroline became as famous as William, and was a very skilled astronomer in her own right, and a famed comet hunter.  She is particularly unusual because she given a salary to be a professional astronomer – no mean feat for a woman who still fundamentally believed that she was, and should be, subservient to men. By her death, she had been honoured by the Royal Astronomical Society and had letters published in the Royal Society and many people consulted her on astronomy.  She was unusual in having her work published under her own name as this book is full of examples of women having their work published under their husband’s name – no matter how little he had been involved.

Running through the book is the development of female education.  Initially viewed as unnecessary, we see the transformation of women’s education as it went through the “Well they’ll be better mothers if the know some stuff” phase to the “they’ll make better conversation if they know some stuff” phase to the “well really every educated woman ought to have a smattering of understanding” phase until, past the end of this book, we reach the modern day when women have, in theory, in some places in the world, the same access to scientific education as men, and yet still we face a shortage of women studying science, maths and engineering.  Although Fara doesn’t make the point herself, the story of Pandora’s Breeches, is alive and kicking today.