So…. it’s been a while.  I confess dear readers that the relentless pace of reading and blogging was getting to me so I had a little rebellion in May.  It all started when I went on holiday taking two weighty tomes with me, and then, when I got to my destination it was all a bit like this: 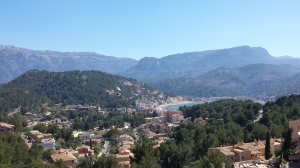 and somehow I just couldn’t get up the enthusiasm to read in the lazy heat.  So I went hiking, sang in a choir festival, generally had a lovely time but didn’t do any reading.  By the time I got home at the end of the week I was feeling deep, paralytic blog-guilt that stopped me from reading and threw me into anti-blog rebellion.

Well, actually, that isn’t true.  It stopped me from reading any of the many books for my reading challenge and instead I fell back on some of my guilty pleasures.  These are the books or authors I read when work is just a bit too much or I just need some totally unchallenging escapism where goodies are good and baddies are bad and the right people win in the end. Some people might think that rebelling against a reading challenge by just reading other stuff is stupid… but, what can I say?  The book geekery runs deep within me.

It is also only fair that, having spent six months mocking E for her taste in Star Trek books, that I ‘fess up to my own guilty pleasures, so here below is a quick run down of some of the books I have been reading.  I’m saying it quickly, all in one post in the hope, dear reader, that you won’t judge me too harshly.  Do you have your own guilty pleasures? Or therapeutic reads?  Let me know.

Winds of Fate and Winds of Fury, Mercedes Lackey

My name is Kate, and I read Mercedes Lackey.  There, I’ve said it.

I don’t claim that they are fine literature but they are pure escapism.  Set in a fantasy world where some people can do magic, telepathic spirit-beings live inside white horses and gryphons populate the skies, Lackey’s books are full of nauseatingly moral people striving to do the right thing and prevailing against unspeakable baddies.  They have their own formula, as much as the Star Trek books do, and often end up being coming of age tales for young adults with troubled backgrounds who are surprisingly well-balanced and always make good choices.  The Black Gryphon is one such story about, well, a Black Gryphon and his human friends who are led by the Mage of Silence (yes, really) in a battle against an absolute rotter of a mage and his armies.  There is lots of noble sacrifice, people learning to accept themselves for who they are and … well… actually I’m going to stop.  I think you have the sense. E calls these my ‘talking horses’ books and knows that if I’m reading them it is generally a sign that she should supply chocolate, gin or hugs. (Which she does.)

Power Lines and The Powers That Be, Anne McCaffery and Elizabeth Scarborough

I became addicted to Anne McCaffery as a teenager.  I loved her dragonriders books so much that when I was doing German A level and needed to improve my reading I was able to get one of her books in German and knew the English version so well I could more or less translate the German word for word without needing a dictionary.

However, I had never read this particular series.  Set on an icy planet this is a classic battle of science against nature (we are on nature’s side, in case you weren’t sure) and of rugged individualism against soulles, corporate hegemony.  Again it isn’t intellectually challenging but they are well paced and exciting. 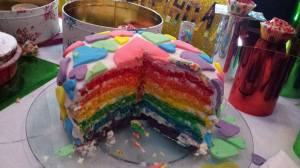 So that is what I have been up to, dear reader.  Well, that and making rainbow cakes, singing, and generally enjoying myself.  But, you will be glad to know that I am back on the blog-wagon and if you tune in tomorrow my review of Dangerous Liaisons will be alive and dangerous.

7 thoughts on “On guilty pleasures and spurious rebellion”