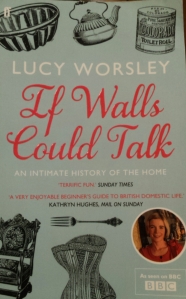 Here are just a few of the interesting things I learnt from this book.

This book is just riddled with interesting tidbits.  I highly recommend it and, if you are able, I would recommend combining reading it with a wander around Hampton Court Palace (well worth a visit in its own right) because it is where Worsley is based and it brings to life a lot of what is said in this book.

One thought on “If Walls Could Talk, Lucy Worsley”