Moby Dick is a classic story 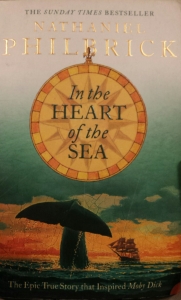 of heroism, mental anguish and disaster on the high seas.  In this beauti
fully researched book, Philbrick follows the history of the Essex, the original whaler that the Moby Dick story was based on.

I loved this book because as well as following the story of the ship it also gives a brilliant insight into the rise and fall of Nantucket, once America’s foremost whaling town.  Although the story of the Essex is mainly based on two documentary sources, Philbrick pulls in information from other shipwrecks and maritime disasters which provide additional corroboration and insight into the plight of the shipwrecked men. He weaves a compelling account full of detail of how whaling worked, the challenges of the industry and the impact it had on the people and animals involved.

We begin the story by learning about life in Nantucket.  The desolate island was useful only as a whaling hub and the entire social structure was built around the twin pillars of whaling and Quakerism.  Families lived in different streets depending on the rank of their menfolk, but what I found interesting was that, as whaling expanded, the men were often away for 2-3 years at a stretch and only home for a few months between voyages.  This meant that civic society, trade and commerce were entirely managed by the women of the community.  They held the social power in the community and managed all the businesses.   Philbrick slyly mentions that

An island tradition claims that Nantucket women dealt with their husbands’ long absences by relying on sexual aids known as ‘he’s-at-homes’.

Apparently one such was found hidden up the chimney in one old Nantucket house – must’ve given Father Christmas quite a shock!

Philbrick goes on to share this intriguing insight into the set up of Nantucket society:

The sperm whales’ network of female-based family units resembled, to a remarkable extent, the community the whalemen had left back home in Nantucket.  In both societies the males were itinerant.  In their dedication to killing sperm whales the Nantucketers had developed a system of social relationships that mimicked their prey.

Anyway, on to the story: the Essex was a whaler being captained by a new Captain, George Pollard, 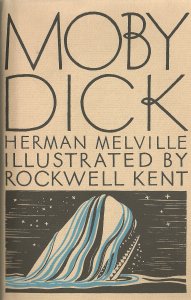 with an ambitious first mate Owen Chase.  They set out on a 2-3 year voyage to kill as many whales as they could and bring back a hold full of precious whale oil to Nantucket.   Their voyage was unlucky from the start and, after several mishaps, and precious few sightings of whales, it was 18th November 1820, in the middle of the North Pacific, before they finally spotted whales ahead!  To catch a whale, the crew split into three teams in smaller boats, known as whaleboats, and in these flimsy craft they set out to harpoon a whale.  The boat led by William Chase was soon knocked out of the hunt and they returned, dispirited, to the Essex.

While he and his crew were on the Essex they noticed a large sperm whale very near to the ship.  To their consternation the whale seemed unhappy and very soon they saw the impossible sight of the whale charging at speed towards their boat.  The first impact shook them to the core and seemed to stun the whale, but only for a time before it came back to life, more enraged than before, and made another vicious attack on the ship that completely wrecked it.  Chase and his crew jumped back into their little whaleboat to avoid drowning and waited in shock for the others to return.

When they did, the men in the three little boats had only  few hours to rescue as much food and water from the wreck of the Essex as they could, and decide what to do next.  What follows is a terrifying and heartbreaking tale of how the 3 boats set off together, were separated and how their different decisions resulted in different outcomes for the survival of their respective crews.

The first challenge was surviving the ocean:

Gale-force winds in the open ocean can create waves up to forty feet.  But the mountainous size of the waves actually worked to the men’s advantage. The whaleboats flicked over the crests then wallowed in the trough, temporarily protected from the wind.  The vertical walls of water looming on either side were a terrifying site but not once did a wave crash down and swamp a boat.

And, heartbreakingly, they suffered another orca attack. Given that whales were really not known for attacking boats, this is really, very unlucky.

Then food and water became ever-pressing concerns.  The men grew thinner and weaker and Philbrick had clearly done a lot of  research into the stages of starvation.  All the crews resorted to cannibalism.  On Captain Pollard’s boat the men resorted to drawing lots for who they would eat when the hard tack ran out.  The man they eventually killed and ate was his nephew.
I won’t ruin the end for you but it is a horrifying, brilliantly told, story of hope, despair, survival and death.  The book also carries on after the end of this story to chart the fall of the Nantucket whale industry and to share unbelievable statistics of the numbers of whales the whalers killed.
The final observation I would share is that Philbrick notes that, after years of persecution, the whales did eventually fight back with stories of whales attacking boats becoming increasingly common as time went on.  Good on them, I say.

2 thoughts on “In the heart of the sea, Nathaniel Philbrick”